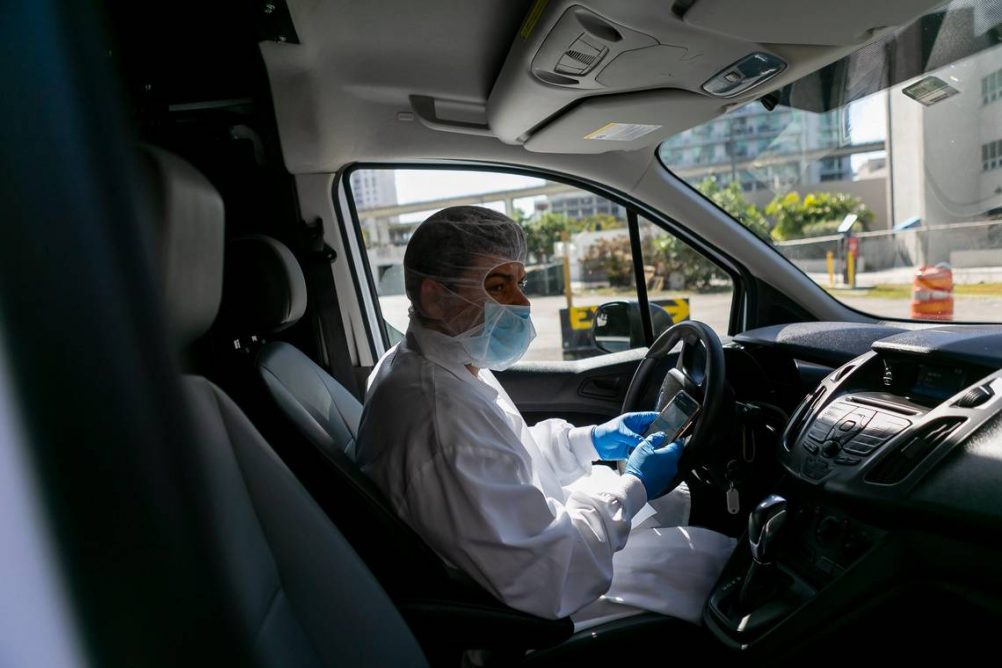 On Wednesday, as orders to shelter at home went into effect in the city of Miami, Yuri Kouzenkov was out and about.

Outfitted in gloves, a mask, and a plastic gown, Kouzenkov was busy delivering batches of meals to the homes of seniors, a task that put him on the front lines of the COVID-19 pandemic, which has inflicted the brunt of its harm on the elderly.

“It feels amazing to be part of a … process that’s helping out the community and the people that are in the greatest need today,” said Kouzenkov, who works for DeliverLean, a contractor hired last week by the county to help feed newly home-bound seniors at no cost to them.

Kouzenkov was just one among dozens of drivers mobilized this week, as a network of local governments, nonprofits, and private companies ramped up food-delivery efforts across Miami-Dade’s senior communities.

The goal is twofold: As county officials explain, meal deliveries help meet the nutritional needs of older residents at a time of general upheaval, all while making it easier for them to forgo trips to public spaces and practice social distancing.

Key to the county’s endeavor is a new emergency meal program that residents 60 and over can sign up for by dialing 311, the county’s government help line.

The new meal program — which was made available after Miami-Dade Mayor Carlos Gimenez declared a state of emergency on March 11 — gives residents free access to recurring home deliveries of batches of 10 fresh, vacuum-sealed meals.

“Just [this Monday], we had 1,285 residents in the county getting their doors knocked on with 10 days’ worth of meals,” said Annika Holder, assistant director of Miami-Dade’s Community Action and Human Services Department, the largest social services provider in the county. “That’s a lot of door knocks.”

To take on the door-knocking, and the actual preparation of the meals, the county enlisted DeliverLean, a Hollywood-based company that sells prepared meals across South Florida.

DeliverLean prepares the food — offering tailored options that include vegan, kosher, and diabetic-friendly, low-sodium meal plans — and dispatches 150 drivers across the county every day to make the deliveries.

At a time when unemployment claims have spiked across South Florida and the rest of the country, DeliverLean has been expanding its staff to keep up with new orders from the county, often hiring workers who recently lost jobs in the region’s hard-hit hospitality industry.

“A lot of local restaurants, hotels, stadiums, airports have been actively sending us their employees to hire,” said CEO Scott Harris, “We have hired over 150 people in the last week to meet the demand.”

“These individuals either live alone or they live with someone who’s also in their age range. They’ve expressed either that they have underlying health challenges, they are scared to go out, or they are living in areas where they may have limited access to food,” said Holder. “In some cases, their support system may not have been put in place. So we’re seeing a variety of things coming up.”

“Our main goal here is to make sure that the nutritional health of our elderly residents in Miami-Dade county is not impacted by this crisis. That’s our number one underlying goal,” she added.

There was no immediate estimate on how much Miami-Dade has spent and will continue to spend on this new initiative.

“Every day the amount of meals is growing exponentially,” said Harris.