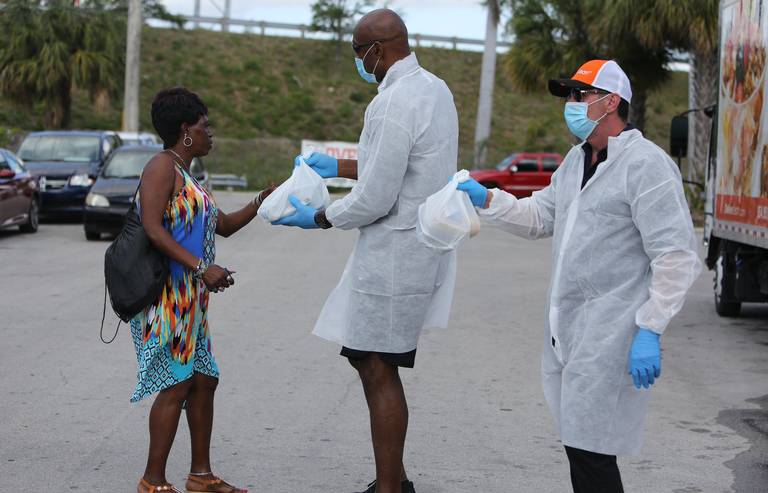 Alonzo Mourning’s Overtown Youth Center has been a staple in the historically black neighborhood for nearly two decades.

But Wednesday morning, his organization pushed its community outreach efforts to new heights.

Mourning, in partnership with food manufacturing and delivery company DeliverLean, led a group of volunteers in handing out free meals at Gibson Park in Overtown.

“We know that expanded services will be important to the community in the midst of these difficult times,” Mourning said.

Wednesday’s food giveaway is the first of many. They will continue every Monday, Wednesday and Friday for as long as necessary, says DeliverLean CEO Scott Harris, who referred to this as a “really important job to do.”

“With individuals at home [and not working], it’s very challenging for them to get meals,” Harris said. “… in this challenging time, we just wanted to give back in any way we could.”

These programs support people such as Eboni Washington, 41, who works as a cafeteria manager at Coral Reef Montessori. With school out due to the novel coronavirus outbreak, she has not worked in two weeks. Getting free meals for her and her daughter Yasmin Webb, 19, eases the financial burden.

“Being that I’m out of work because there’s no school,” Washington said, “it’s awesome to have this at our disposal.”

Webb, an OYC alum and student at Miami-Dade College, was thankful for work Mourning has done not just in her life but for the community at large.

“People go through stuff,” Webb said. “Unfortunately, that’s the way the world is so we just have to take what we can get and be grateful. I appreciate the OYC for [this] and everything they’ve done for me. “

Wednesday’s efforts hopefully inspire other companies and restaurateurs to do the same, Mourning says.

“We’re trying to create a movement,” the Hall of Fame big man explained.

Not only does he intend for the giveaways to expand to five days a week, Mourning wants them to happen in Opa-Locka, Liberty City and other minority neighbors throughout Miami. At a time of such uncertainty, OYC executive director Tina Brown defined their role simply.

“We don’t have that same, daily interaction with students and families as we did precoronavirus. Our goal is to provide some continuity and some consistency here in the community.”